“I was very discouraged when the Aja SOS finished,” remembered Dodji, our Aja translator and a current School of Storying (SOS) trainer. He explained, “It looked like my people were rejecting the stories.”
So few participants in the Aja SOS in October 2013 were interested in telling the stories that we despaired of anyone ever using the stories in ministry, but God was still at work! 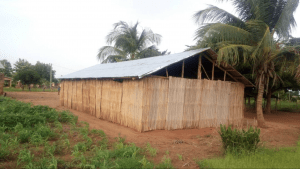 We recently learned that one of the participants, Francois, began telling stories in his home village. When people in his church wanted to learn to tell stories, he trained Germain and a few other men how to use the stories. As these men visited surrounding villages to share the good news of Jesus through the Aja stories, in one village, the people responded to the stories with such enthusiasm that Germain and his friends planted a church.  After Dodji heard Germain talk about the new church, he exclaimed, “I’m so happy to know that people are using the Aja Bible stories to reach our people.”
Sensing God‘s prompting to restart a storying movement among his Aja people, Dodji offered two storytelling trainings in April in Djakotomey, his home village. By the end of the trainings, 71 new storytellers had told stories to 596 people and had started 68 new story groups.  As Dodji follows up with these new storytellers, he hears how people are responding to the stories the training participants tell. He recounted, “Jean-Paul started a story group, and, in just three weeks, his group grew to 32 people, and 26 of them have become believers! Amele and her husband started a group in another village, and 60 people attend regularly!”
Dodji continued, “Now I realize that it was just not God‘s timing yet. It’s like I hear a voice inside me saying, ‘Don’t ever again think that no one is using the stories you are helping make. God is using His stories to do exactly what He wants among people groups. What you have to do is just go, make good stories, and train storytellers. God will use them according to His will.”
in Africa / Field Reports / Testimonies 0 comments
Share
Post tagsAfricachanged liveschurch planting

In the Middle of Nowhere